So a funny thing happened this morning and in case you missed it Im going to lay it all out for you. All the steps that were taken just randomly to lead to a bit of a crazy outcome so far. Funny how things work with the internet.

Last night I posted this below about the permit being applied for much earlier then we have been led to be believe concerning the March For Our Lives. 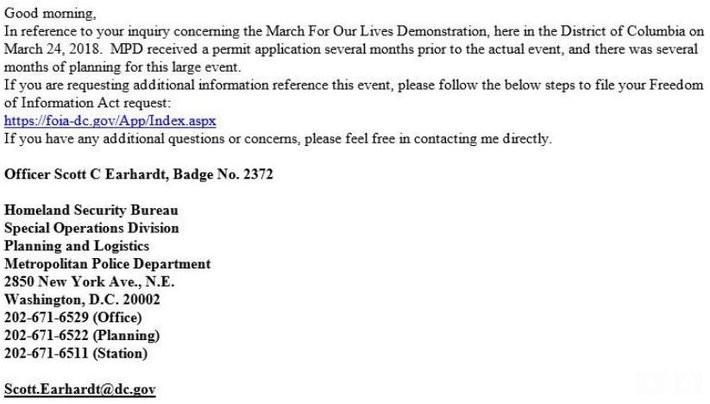 Things to note about this. It is mentioned that the application to the Police Department (Important)was made several months prior to the event. The event that led up to the March even being considered hadn't even happened yet. This of course was the Parkland shooting in Florida.

I got a lot of slack from some about this last night, no big surprise, the usual where's the proof? That actually kind of made me laugh because all the phone numbers are right there for anyone to call and verify if they really wanted to find out for themselves.

As you will come to see it doesnt even to appear to be all that hard to do. I mean come on now, how much more can you ask for on the proverbial platter? Even and email to the officer himself.

Moving on as things do. As per usual the smart ones have to come back with their own proof of how this is all so wrong and fake. Again no big surprise here. I have no problem being wrong, I have been before and I probably will be again sometime in the future. I'm human. Not this time though

So below we shall see what they presented as their proof all brought to us by the Washington Post themselves.

I had to take a screen shot of this one as it is posted in a pdf form. To see it

for yourself in all its glory you can go to this link:

I captured the most important part though for you. The date it was applied for and more importantly

who it was applied too. NATIONAL  MALL and  MEMORIAL PARKS (Important)

This is important because there are two separate entities here being applied too. Both are real

and BOTH are required by law to get a permit from each. Click to enlarge if needed. 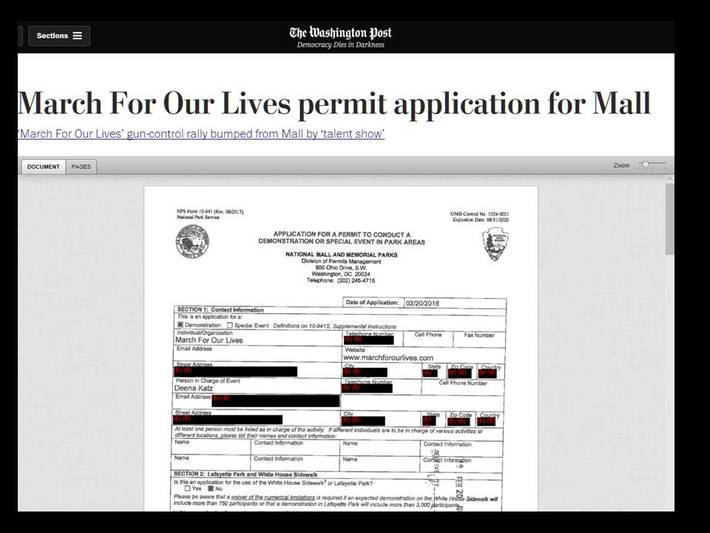 SO, How do I know these TWO permits are both required? Actually I didnt to begin with. Learn something new every day.

I had gotten to thinking about how did we end up with two? Knowing how the government grinds when it comes to permits

in such a short time frame. Nothing is ever that easy with the government.

Oddly enough though as fate would have it, I do just happen to know someone that has just applied for one themselves.

One of our own actually. One trying to bring a March for our own MAGA Agenda in April.

Have a question? Why not ask the horse themselves that may have the answer. Always has seemed to be the simplest route to go

as far as Im concerned. So I did and below is how that went. Very Key things are said through this conversation so pay attention!

ME: @tracybeanz Hey Trac quick question. How far in advance did you guys have to apply for the march? Was there a specific time frame of advance notice to apply that had to be observed?

TRACY: Hey! The website said you can apply up to a week to 10 days in advance buried in all their regulations. We applied 3 months early to ensure we received our permitting. The parks service was bogged and didn’t get tono could be, but there’s really no way to be sure. It’s a big production to put on, but with lots of money and professionals ? I don’t know. I haven’t shared this because there isn’t a way to be certain it wasn’t repurposed.ir permit until 4 weeks ago, which caused a bit of headache.

ME:Thank you ma'am. So knowing this do you think someone got a little push with their application??? Im sure you know where Im going with this.

.TRACY: It could be, but there’s really no way to be sure. It’s a big production to put on, but with lots of money and professionals ? I don’t know. I haven’t shared this because there isn’t a way to be certain it wasn’t repurposed

If you are planning a set demonstration after there are lots of rules so I can see an organization needing to apply early. My experience overall was “ok” with parks and great with MPD. Two separate entities

ME: Funny how it was all bogged down for you around the same time someone else got pushed to the front of the line dont you think?

TRACY: Lots of things are funny in this world. Lol. I’m feeling where you are going, but not ready to commit to that. Let’s talk Sunday, April 8.

ME: I do feel better after you mentioning that your time spent dealing with the PD was great considering this is where the earlier time frame is coming from. Thanks for the kick back :)

TRACY: Officer Scott is great. (Note Officer Scott is the same name on the first permit graphic above from the PD. 1 of the entities required for permit and also the one with the proof it was applied for much earlier and before the shootings ever took place)

ME: ooooooooooo and even better you know the man exist!!! This is perfect and unexpected! Weeee lovin this hole! So glad I asked

So what can we conclude from all this now? It takes two permits, both shown above are most likely correct in their dates and time frames.

One Shows it was indeed applied for much earlier in the game before the shooting even took place.

The second Was applied for the same time as someone we know had also applied for one much earlier, yet got the green light to go much quicker.

3. Two people you may or may not follow and whose work you do know of  have bascially proved that the above is all correct with some simple communication. The only real unknown here is the push to the head of the line, but most likely did occur in my own humble opinion as it would make sense considering the players and the agenda.

Now what do you know about that? All simple solved by two of your favorites, lol me and the WONDERBEANZ!

UPDATE Tracy wanted to add a few things for clarifaction:

I want to make a few things clear - 1. We applied for two permits as required as jurisdiction is confusing. One from the MPD (officer Scott) for the March and one from the parks for the end rally.

2. The march permit couldn’t be approved until the parks approved their portion because the start and end was in parks jurisdiction. Ie: the portion in front of White House and end at freedom plaza

3. Officer Scott was on top of everything from the get go and followed up with us several times. The Parks department was helpful throughout but there were some instances of miscommunication.

4. It NEVER felt as though they were biased. They’ve been fair to us throughout. They were very busy. This is evidenced by the fact that we needed to alter our ending location because the National mall was booked already. They helped us to choose a good alternative.

5. They helped us by providing a list of vendors who could provide sound for that day. They asked us a detailed list of questions. They then approved our permit. I have not received it yet but MPD couldn’t approve theirs without the Parks and I’ve received MPDs.

6. Large events like the “March for Our Lives” do take a considerable amount of resource from within the permitting offices to pull off. I don’t necessarily think this event is what held us off because there are several other events on 4/7. I just want to be very clear here.