Now I realize this is a reach, but ever since Q has shown up there has been guesses galore on who Q might be. I myself have had basically two. I pretty much eliminated my first guess earlier in the game. Not completely, but mostly. There was a box they didnt check for me.

This has left me with Melania our dear FLOTUS.

Anyone that has studied her would know she is one very smart woman. Speaks many languages and has been highly educated.

A Q Clearance is equivalent to a United States Department of Defense Top Secret clearance. "For access to some classified information, such as Sensitive Compartmented Information (SCI) or Special Access Programs (SAPS)...

Now there is a LOT to that clearance, but maybe she only needs it to access certain things needed for Q Drops. Now Im not sure how many First Lady's have had this kind of clearance if any, but this is a whole new ballgame we are playing now. So it could be possible for her to have.

She clearly has this and it would also explain Q+ as well as anything else does.

Now a funny thing came up today and yes a bit more of a reach, but study this picture closely. I myself have never seen it before. Check the date, who tweeted it and to whom they tagged. As far as check the date I only mean as to what year it was posted. 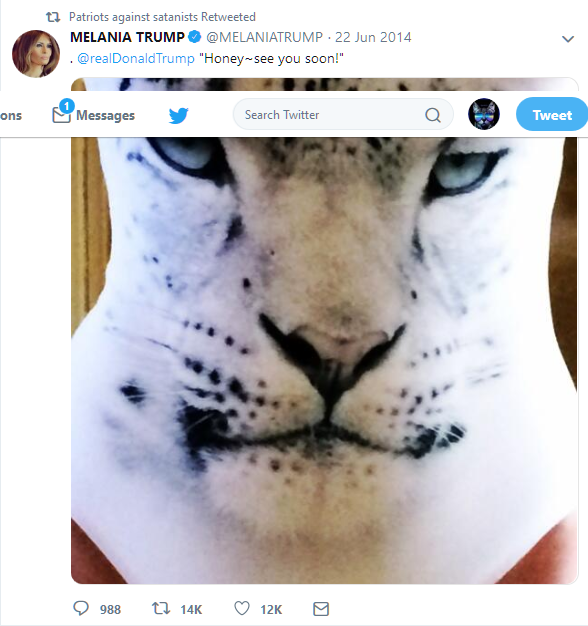 Leopard Spots against a White Background? Now dont go thinking I've lost my mind, this is the reason I put this in the Yig Notes category! It is just my own thoughts that Im sharing with you. When I came across this Melania Tweet it just triggered a little something in me to mention all this. Is it true? Who knows. Would I purposely dox Q. Never, but then again I dont know who Q is to Dox them anyway. This is just my own speculation thinking out loud...

What do you think?

You need to be a member of The Yig to add comments!

of 3 Next
This reply was deleted.

"Excellent and well thought out. Will have to save this one."

"Boy that was chilling and IMHO completely accurate.
I got a tingle up my spine when he talked about fires. I was thinking of the hundreds of fires we had here on the west coast just a few months ago. We almost had to evacuate.
It was so weird…"

"Using the philosophy that "who" says something either justifies or invalidates The "What" that is said, IMHO, is a slippery slope.
Think of everything Trump said. Now factor in TDS and evrything he said about the country and the direction it needs…"

"Thank you very much for that. Yes. YT would have jerked that down in 5 seconds.
Great video and message.
Gene Decode on blessed 2 teach has been doing a series on all the DUMBS across the world and which ones are still in cabal control and which…"

"AWESOME !! Hope she is on point. My gut says she is legit. The white hats on earth and off world are coming in strong right now.
The dark forces are going to be evicted.
I have to believe that."

"Thats kind of sad as its such a limited way of viewing things. I prefer an open mind myself because I never know where anything I could learn from may come from. I certainly wouldnt want to miss it just because someone I didnt particularity care for…"

"Kazz, the point is WHAT was said, Not WHO said it. This is all geared to NOW. What Im pointing out as that this is what we are seeing happening around us everyday now and slowly but surely boxing all of us in.
Just like I used to say back in the…"

"Agreed, Brian.....we need to be aware of what is going on!!  Always have extra good & water on hand in case the grid goes down.  None of us REALLY know how this is all going to turn out.  ???
Of course, Kerry Cassidy thinks we are fighting a group…"

"I've been saying this for decades in Canada. Nearly no one listens. Many people, even the ones that say they are woke, cannot accept this as a possibility. I have been making progress in the last few years, able to get people to see, but still they…"

"I dont really see how being a member of JBS has anything to do with this in the present. What he talked about IS happening today all around us. Not hard to miss with eyes to see.
Maybe those people hollering about helping a little old lady across…"

"From what I saw this morning it looks like Ontarion in Canada is testng out the More government until it's Total Government angle. THe police are now going to stop people who are outside their houses and asking them why they/re out and where they…"
More…
Loading ...