Okay Im going to try and not go the nine yards that this really is.

First some background: A few months into the appearance of Q I had one of my followers start talking to me in the Private messages on twit. Turns out his job was that of the guys that read satellite photos or recon photos looking for anything the enemy may be hiding, weapon wise etc. I dont know the technical name. So he is very good at looking at these kinds of photos.

A few weeks into our off and on conversation he asked if he could email me a couple photos. Sure why not. The photo below are what he sent. I did the enlarging zoom of it.

Now the back story on the photos: According to him this shot was taken when a satellite was just coming into place to orbit Mars. In other words it was in the process of hitting the brakes to orbit, still going high speed of thousands of miles an hour. That is just a figure of speed. The point is that it was moving fast and hadnt reached its slowed down orbit speed yet.

What is curious about that is that it managed to take this picture. Almost like someone knew where this thing was and when to snap the photo. You know, You only have one shot Frank dont f it up. Then you have to wonder how they knew to begin with?

According to him this craft appearing thing sitting on the lip of the cliff is over three aircraft carriers wide. Also according to him is that this is a "Jump Base." He says there is a second one nearby. This one is for bringing heavy equipment in. More or less like Scotty beam me up. The other is the living quarters.

Side note, supposedly he has had many arguments with Richard Dolan about this thing. Maybe if someone has contact with him, you can ask him about this. IIRC their argument is over how long it has been there.

Why am I putting this here you might ask? Well, Q basically. Just a page back we are discussing Q and how he points to UFO's etc. I believe this would fall under the blanket of some very dark government projects.

Have they figured out how to send things through with Cern or by another means? How about the Stargates that are placed in the middle east?

I really hate to say this since we have poopooed Corey Goode for so long, but this might just give him a little credence. If there is a living base the same size as this thing in the picture, that's pretty huge.

IF we are up there and this far advanced, it would make sense that Q would be somewhat caviler about the topic. I don't know, maybe if some of you really sharp tacks here add a possible "Jump Base" into the equation, would you find other hints of it from other drops? Or a creatable wormhole?

Also if they can jump to there, where else can they jump to? Now would it make sense how Q is showing that future proves past?

Sigh.. so many questions.

The closeup. IGNORE THE ARROW, that was just for something I was asking him about. 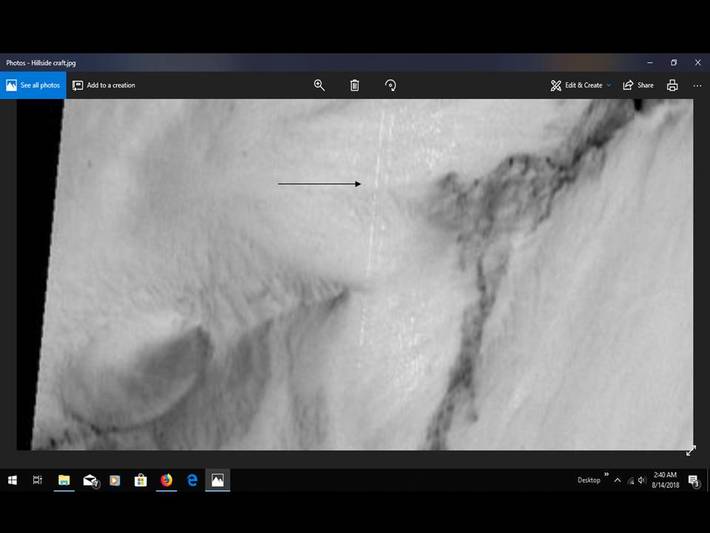