Okay second try as I was just about to post my first one I had just finished when the cats decided to step on the power strip and turn off my pc! Ugh.

You folks should know I wouldnt leave you hanging for too long on this!

I am going to try and start explaining why I posted the picture I did today to get you folks on track. As I mentioned I have a lot more to come so this is just to get you started with the thought process. Lets begin shall we?

First  we have JFK arriving at hte airport in Dallas Mr. SPECTER. Did the automobile stop at any point during this procession?

Governor CONNALLY. Yes; it did. There were at least two occasions on which the automobile stopped in Dallas and, perhaps, a third. There was one little girl, I believe it was, who was carrying a sign saying, "Mr. President, will you please stop and shake hands with me," or some—that was the import of the sign—and he just told the driver to stop, and he did stop and shook hands; and, of course, he was immediately mobbed by a bunch of youngsters, and the Secret Service men from the car following us had to immediately come up and wedge themselves in between the crowd and the car to keep them back away from the automobile, and it was a very short stop. At another point along the route, a Sister, a Catholic nun, was there, obviously from a Catholic school, with a bunch of little children, and he stopped and spoke to her and to the children; and I think there was one other stop on the way downtown, but I don't recall the precise occasion. But I know there were two, but I think there was still another one.

How does Connally remember so clearly the first two stops, but not the third one? Did he mention it by accident? Did he forget the third stop wasn't suppose to have happened? Is he just a horrible liar? I really dont know but I do find it odd and something to keep in mind going forward.

Next we have the photo that got this all started to begin with. 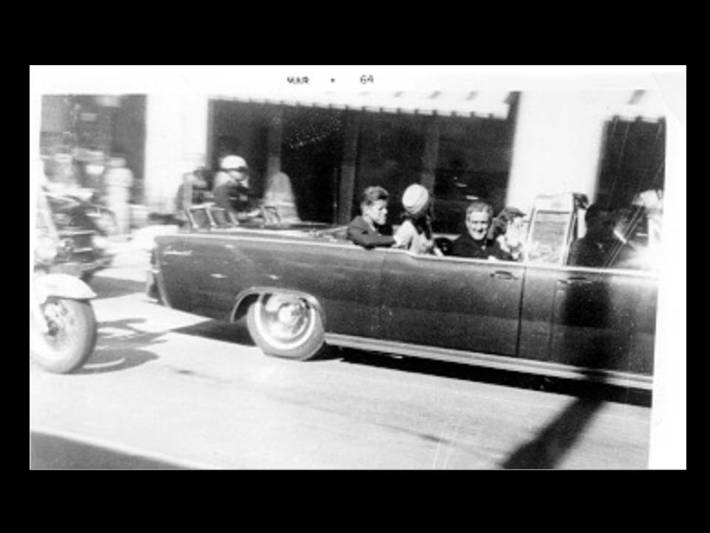 I have to ask you does this man look like the man that got off the plane? Do you ever remember Kennedy having such a sharp protruding chin? Is the hair the same as the one from the plane?

Now I know the first thing you guys went after when I posted the picture was the date. You answered it for yourselves with the fact that is was the date the film was developed. You know Im a camera person so I probably would know this. This being the case why would I bother posting it to begin with? No real mystery to it.

Some of you also pointed out the lack of SS detail around him. This I Will touch upon. Think about this. Who is really the SS Boss? Who are they loyal to? Who would they listen to and follow orders from? Some people mentioned Johnson was behind it. If this were the case dont you think Kennedy would have noticed his SS wasn't around doing their job and wonder why? Don't you think he might question that? He knew from the begining he wasnt going to the safest place for him. Why would he allow them to keep their distance? Things to keep in mind

While we are here, I do want to address those that thought Mueller was in the car in front of Kennedy. Did we miss History class that day? Lol even if you did or werent even born yet to really know, think about how old Mueller would have been then. He was a puppy like the rest of us. Does the guy in the car really look like a 20 year old? You all had me shaking my head on this one. I get why you went for the date thing, but Mueller???

Now this next picture makes me think the third stop happened after the second picture above. Is he the same man in all three pictures? Questions Questions.

Like I mentioned I do have plenty more to present to you. I will put Part 2 up tomorrow. Until then I want you to think about a couple things.

We do believe that Kennedy was trying to tell us about the bad guys trying to create the New World Order and nothing was good about it. We also believe he was shot because of this and what he had to say about them.

If Kennedy knew these bad guys were coming for him, why did he put himself out there in the open while walking right into their lair? Why didnt he have tighter security?

Who was the SS Boss that day? Who told them to stand down?

Why the three stops?

If you knew people were coming for you and you wanted to remain safe and also still remain in power, how would you go about that? How would you disappear with a finality to it?

If you were in such pain from your back how could you go about getting out of the rigorous daily agenda that would tax you so heavily so you could also relax?

If you like my work and would like to help support the site you can become A PATRON and get some Bonus goodies for signing up!

If you would just like to make a quick donation you can simply PayPal Me!

Remember I Work for You, so Help me Help You!