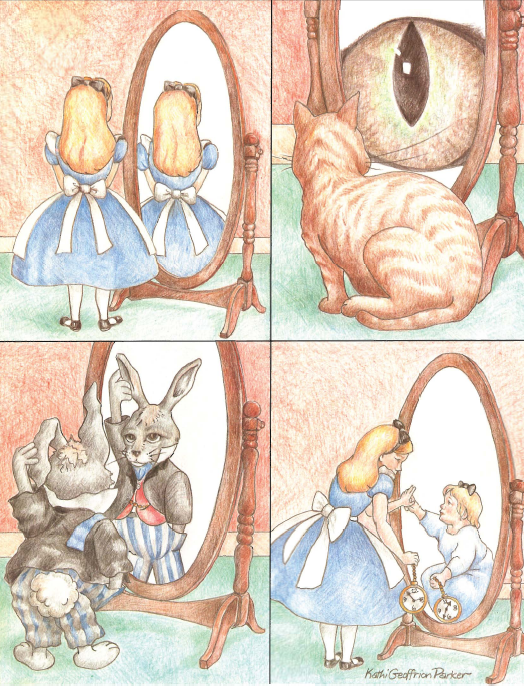 I thought some of you would enjoy this article. I am only going to leave a snippet of it here for you because I just came across it again and obviously it isnt mine. I will leave the link for you to follow and finish the read if you wish to do so. Clearly we are far more advance into what could be consider "sci-fi" than we are led to believe. This link will take you directly there: Project Aquarius. I have also added a video below in which Michael Schratt speaks about this and more.

In "Alice in Wonderland" the White Rabbit is introduced as always running late. He carries a watch that is running backwards but when viewed Through the Looking Glass, it shows time correctly. Conspiracy Theorists often use the phrase "Going down a deep rabbit hole" when dealing with government and military cover ups and the black ops world. Well there is a reason for this... the Government uses the ALICE CODE.

"Above the door frame leading into the lab that contains the Looking Glass project at facility S4 at Area 51 there is a stuffed White Rabbit holding a backward watch mounted permanently to the frame."

"Per Dan’s comments, permanently wired above the entrance to the Project Looking Glass laboratory, there was a large three foot tall statue of a rabbit (symbolic of Alice in Wonderland). This rabbit was described as having a clock in his hand, and wearing a royal maroon vest, with gold fringes, and black buttons"

"Level 2 or “4-2” was known as “Alice’s Floor”. This specific floor contained a laboratory for weapons research and development, three board rooms, and provisions for emergency supplies. Also located on level 4-2 were two specific areas which contained components for project sidekick. Level 4-2 was also the location of Project Looking Glass. This device utilized six (composite) electromagnetic fields, and a height adjustable rotating cylinder which is injected with a specific type of gas. The entire assembly can be rotated 90 degrees from the horizontal axis. This allows scientists to warp the local fabric of space-time both forward or backwards by long or short distances relative to the present time. The Project Looking Glass device was used to predict the potential probability of future events. Once the device is tuned properly, images of probable future events are projected in open space within the fields, similar to a hologram. The data output of the device (images and in some cases sounds) were then captured via high resolution audio-video capture devices. If multiple probabilities of the same event were displayed, they could be de-interlaced by use of specific software platforms. Next to the Project Looking Glass device were two “transport pads” which could teleport physical matter or humans from one location to the other instantly, but not always reliably and with certain disastrous outcomes during testing phases. Dan had the unfortunate experience of being in the room during one of those unfortunate outcomes, and witnessed a death."

"During Dan’s time at S-4, five concurrent programs were also being conducted. One named “Project Galileo”, dealt with the propulsion system of extraterrestrial and future terrestrial vehicles. Another program termed “Project Sidekick” which Dan said relates to a weapons platform but refuses any further comment. The third project known as “Project Looking Glass” dealt with time distortion. More specifically, this program dealt with the physics of seeing the effects of an artificially produced gravity wave on time. The overall umbrella designation for the study of anything having to do with Extraterrestrial Biological Entities, and their interaction with humans on earth was known as “Project Aquarius”. The fourth project was a separate weapons program developed as a second generation research program from Project Sidekick. Dr. Dan refuses to provide the official project name for that program. The other program involved a suite of biological defense operations for which Dan worked in the capacity of senior scientist. No further information will be provided for that program."